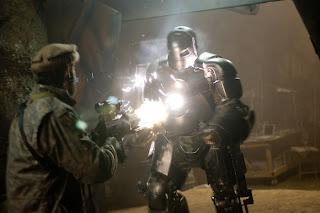 What I love about the movie is that it walks a fine line between plausability and farfetchedness. It has the right amount smartassery (in dialogue) and action sequences to keep the fanboys satisfied while enticing the non-followers of the source material. I dig the fact that it's not campy at all, which is a common trap for superhero movies. It's a given that RDJ totally owned his role as the decadent and likeable asshole Tony Stark, but I appreciate that they didn't overplay his alcoholic side (Tony, not Robert).

In spite of the outlandish premise that could spell problems for a live action film adaptation, there is a realistic temperance. One such example is during the scene where Stark does a weather and air traffic control check before doing a test flight. His AI butler Jarvis warns him that there are "terabytes" of calculations needed to do an actual flight, but Stark/Downey Jr. stays true to character by skipping the advisory and blasting off into the sky.

The verdict: go see it if you haven't already, nuff said :)

Thursday, May 08, 2008
Someone once said that people blog to show the rest of the world that they are plain, simple and cool. I can't help but think that this is true, and it depresses me to think I am one of millions trying to put up this conceitedly self-depreciative tone in order to project that I am in fact, the opposite of how I describe myself. Here I am in this vast sea of users contributing to an infinite void of content that ultimately amounts to nothing. Who really gives a shit about what I did last weekend? I've been going through other strangers' blogs and the whole self-centeredness of it all is beginning to turn me off. All this pa-cute crap, smart-assery and trying to be ironic and shit is making me lose my appetite to blog any longer.
Posted by marko at Thursday, May 08, 2008 0 comments