It was a bit of a hectic weekend. Lyn, her co-workers, and I saw The Da Vinci Code last Saturday. So that was what the hype was all about. Essentially, it was well-made although I was a bit impatient at the end and just wanted the end credits to start rolling. Since I haven't had the chance to read the book, I felt the conspiracy theories in the film were presented too broadly. My eldest sister said the book was more detailed, and you'd find your head spinning with all these historical facts mixed in with lore and large chunks of fiction. The main issue I had was that I only picked up on what was really going on halfway into the film, since it was lacking in detail.

I'd have to disagree though with some that felt the movie wouldn't be too much without the faith-shattering premise. It is a good movie in itself, book or no book. That's the problem with movies that are heavily anticipated by an avid fan base. If it's less than perfect, it crumbles under the sheer weight of expectations...and believe me, expectations have no bounds within the confines of human imagination. Think about how the first film of the Matrix trilogy blew everyone away since it came out of nowhere, and no one was expecting it. And then came Reloaded and Revolutions and that had everyone screaming bloody murder.

So this was the movie that had some of our esteemed leaders shitting their pants? Open your freakin' minds, people. If you think it takes a work of FICTION to initiate the fall of Christianity, then you should be worried about the people who would change their beliefs at the drop of a hat. Even if you enforce a nationwide ban on the damn thing, our friendly muslim comrades would gladly furnish anyone with an "unofficial" copy of the film at your local sidewalk video store.

We headed to Libis after the movie to drop off Lyn and her co-workers at Eastwood while I went to Shaw blvd for a party that my former co-workers held at the Beta Sigma Phi frat house. It was a mix of booze, good eats, and generally good singing. One of the guys brought along a guitar (I think he moonlights as an acoustic singer) and had some of the people belt out stuff ranging from Bamboo to Bob Marley.

When people started going home, I went back to Libis to pick up Lyn. We stopped by a 24 hour pares store on the way home to grab something to eat. There was a bit of a scuffle that took place right across where we ate. It was between a taxi driver and his disgruntled passenger. I'm not sure what happened, but it seemed like the driver was trying to screw over the passenger over the fare and the situation escalated when the nearby folks (barangay tanod or nearby jeepney drivers, not sure) decided to help out by chasing the cabbie with arnis sticks. The taxi tried to make a getaway in his vehicle, but the tanods went after the dude in their owner type jeeps (didn't know they were that fast!) and they brought back the guy several minutes later. From what I could tell, they brought him to the local precinct to settle the dispute there.

Fastest vow broken ever. Three weeks into a non-smoking pledge and here I am with four sticks consumed last Saturday and Sunday. Selfish, selfish me. Anyway.

Had lunch with the eldest sis yesterday. She had me sign a renewal on my life insurance policy that mom and dad paid for because I'm broke right now. We had a good chat about parenting concerns such as the bummery that is primary complex, tooth decay (o ngayon mas kawawa ang anak ko kasi masakit na ipin dahil “kawawa” naman daw pag umiiyak dahil sinispilyuhan *sigh*) etc etc. Treated me to a hearty lunch at Kitaro's too. Bloody Sun Cellular's ever-so-unreliable signal went out on me the moment I entered the mall. I knew we were supposed to meet at the food court, but when Sun's service failed me, I had to roam the large area for a good 20-30 minutes looking for my sister (while going in and out of the mall in the futile attempt to get a signal). Hurrrrr.

Upon getting home from the mall (slept through the whole trip), I gave Dan his pasalubong (cheese curls and chocolait), played with him a bit and nodded off from 5:30PM-9:30PM. I cancelled my Japanese class because I've been having a steady, throbbing headache since the day before and felt I was coming down with something. So off to bed I went after taking Biogesic. When I woke up, he was already sound asleep since 6:30 because he only had an hour's nap earlier. I feel guilty sometimes because I'm working from home, but I could stand to spend more time with him. I just get tired sometimes so I doze off a bit from time to time while the yaya watches after the little one. Oh well, I get to feed him, give him a bath and brush his teeth almost all the time. We get to read his picture books a lot too. Well, that wasn't such a smooth way to end this one was it? 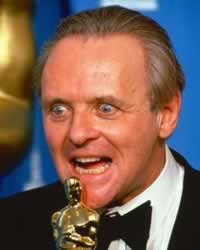 P.S. Sir Anthony Hopkins should be legally forbidden to do any Hannibal Lecter impressions outside of shooting any movies about him. Can you imagine if he did that to you as a joke at the dinner table?

Saturday, May 20, 2006
The Inquisition Reloaded

Ever so rarely do I comment on the sad state of affairs in my beloved country, but this is just too retarded:

It's not like they can stop people from flocking to other theaters that aren't chickenshit to show the film. IT'S FICTION PEOPLE. Get over it. It's a big "WHAT IF?", just like the "Last Temptation of Christ"

What the hell are they so threatened about anyway? That people are going to start renouncing their faith and go on a church-burning spree? That people don't have the mental faculties to distinguish what's real and what isn't? You might as well round up all of the Dan Brown books in the country and set them ablaze for everyone to see.