skip to main | skip to sidebar
Tuesday, August 28, 2007
Just Messin' Around
*courtesy of the bonus disc that came along with my Terminator 2 DVD (courtesy of my friend who shipped it all the way from Las Vegas): 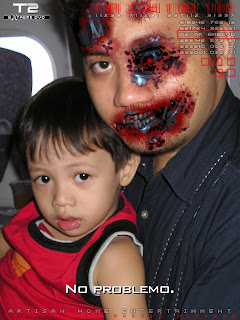 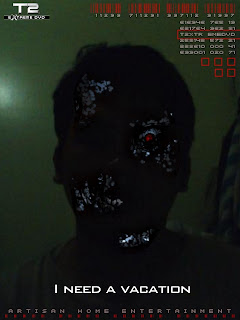 Your flesh is a relic, a mere vessel. Hand over your flesh and a new world awaits you. We demand it.

*Get Your Cyborg Name

I took these with my old faithful Olympus which was brand new back then. My friend made a video with a soundtrack and here is the result:

If only I could use hindsight during an eye exam or when driving at night, but alas it only serves to remind me of all the times I could have been a better person to the people around me. If I could go back in time, would I really want to? Probably, if only to seize the opportunities when I could have done the right thing.
Posted by marko at Sunday, August 12, 2007 0 comments

My masters have been less than pleased with my recent slump in overall performance which comprises attendance and whatnot. It's been a while since I got chewed out that good. So much so that I'm anticipating a denied request for leave I had planned at the month's end. Oh well, what's an errant phone monkey to do right? To be fair though, I have been pulling 11 and 13 hour shifts over the past two weeks, and while I have been late often, I haven't been absent in over a month. But I know when I'm wrong. Hopefully, my masters will put greater weight on my good traits over my less than desirable ones and grant permission for leave.

The only thing that bums me out is that I was probably made trainer only once because of my said lackluster attendance records. A while back I was made to train a couple of agents who needed a bit of help but that seems to be more and more like a one-shot deal. And to think the boss personally talked to me about handing me this new task (well it was an online conversation but that's as personal as it gets as we're continents apart). I don't know if they just don't need to train anyone for now or they just got someone else who slacks off less than I do. While I had to give up the privilege of not physically commuting to work, I liked the feeling of breaking the monotony of my usual routine and actually relished in an added sense of responsibility.

Moving on! Speaking as a member of the non-athletic subspecies of humanity, it's mighty easy to get into badminton. I'm talking about the casual, freestyle, just-for-shits-and-giggle kind and not the professional type of play. Lyn and I have enlisted our next door neighbor and BIL (who usually get together to drink more than anything else) to join us in our bi-weekly (or tri-weekly, God and my wallet permitting) sessions. It feels good to sweat out your stress and other hangups over a nice one or two hour game.

I don't know if the scale at the local grocery is broken or what, but I think the readings show a drop in my weight faster than what I was expecting. I had weighed myself before and after a month of playing, and the results took me by surprise. I'm going back to getting weighed soon but my parents did say I trimmed down a bit since my belly wasn't as obvious as before. All I can say is that marginal improvement is better than none. Who knows - if I keep at it, I'll lose enough to look like I did before enlisting for the sedentary life of a drone of the digital empire. Not that it was anything like rippling musculature back then, but I certainly felt better about how I looked before.

Oh, Kastigo's album launch last week went very well. Hopefully I can post videos and pictures here once decent videos surface and Dad emails his snapshots over. But that's all for now.
Posted by marko at Tuesday, August 07, 2007 1 comments