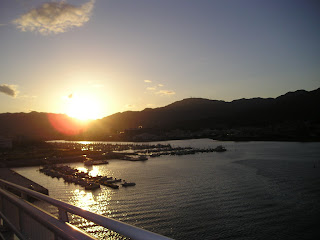 When daddy looks at the sunset, he wonders if you see the same one as well. As the sun dips into the horizon, daddy thinks about you and asks himself if you're doing fine over there. He remembers the time when he raised his voice at you not because you were misbehaving, but because he was just tired and impatient. Daddy still remembers how you only flinched and didn't cry because you're a brave little boy. It was just like the time when you were sick at the hospital and didn't throw a fit as they pricked you with the IV needle. It's those memories that makes daddy recall all the times when he could have been more understanding.
And now daddy wishes he could kiss you goodnight but he can't because you're there and he's here. He misses you so much that he even dreamt that he was carrying you in his arms with your head resting on his shoulder. Daddy wishes that he could pick you up and tell you that he loves you but he can't because there are oceans and seas keeping him away from you. He doesn't open your pictures on his computer because they're too painful for him to look at. It reminds him how far away you are and can't be with him for now. But daddy's trying his best to be strong and not come undone from the pain of not being with you. Someday, he hopes you'll understand why he left you, and not hate him for doing so. Will you still remember daddy when he finally sees you again?
Posted by marko at Wednesday, November 14, 2007 1 comments

It hasn't totally sunk in that I'm actually here, in a foreign country that I've wanted to go to for the longest time. Being cooped up at work for 11 hours a day doesn't make me feel that I'm in Japan. All I know is that I'm just somewhere far away from Dan and won't get to see him until next year. Every day without him is another thorn in my chest. I hope they allow Dan to come over even for just a little while, or least let Lyn go home with the manager (for an export meeting tentatively scheduled next January or February). There are times at night when we come home from work and I look up to the sky, forgetting for a few moments that I'm all the way here. I look away and I suddenly remember that I'm far, far away from my little boy. The most difficult part of the day is in the morning because that's when I think about Dan the most. Is he happy, content, well-fed, safe and warm?

Now I know what it means to die a just a little more as each day passes by. Each day is another one spent without my child. Even before I left, I knew it would be difficult to be apart from Dan in order to further my career, and ultimately secure his future. But as it turns out, anticipating the storm and actually being in middle of its eye are two very different things. It pains me to think that I can't be there for him now. I hope he thanks me for doing this and not resent me instead. The only thing I can do now is make the most of my stay here so they make me manager or at least upgrade my training visa into a working one. Then I would earn more, which is the entire point of being here. Then it would be worth leaving Dan behind for so long. Otherwise, all the hurt I'm going through will have been for nothing.

I have no other option but to succeed.
Posted by marko at Wednesday, November 14, 2007 0 comments