Finally got another fan installed for the PC. I figured summer is really close, so adding another fan won't hurt. With all the apps I have running during work, an exahust would be a good way to keep the temperature down. So I headed off to CSA (where my siblings and I went to high school) to catch Euphoria: Souled Out. It's basically a gig featuring four acts, namely: Sandata, Kastigo (my sis' band) UrbanDub, and MYMP.

I was late and missed the first band (Sandata) because a traffic enforcer pulled me over at the Shaw/EDSA intersection. We had a lengthy discussion on the merits of beating the red light. If there was a law against beating the yellow light, then I would have plead guilty. I was squarely in the middle of intersection when the light was still yellow. Supposedly there's a line at the intersection that you can't cross when the light hits yellow. He was motioning me to stop at line (by pointing at the said line) when I thought he was gesturing to hurry up before it turned red. They repeatedly asked for my license, but I refused to and reasoned out that I was far from red by the time I crossed. I adapted a firm yet polite stance, and for the first time, they let me off without getting a ticket, or "redeeming" my confiscated license right then and there.

The turning point was when he asked for my license yet again and I said, "Ipapakita ko lang sa yo ha. Baka di mo na ibalik pag binigay ko". So I turned on the light inside the car and showed it to him. I can imagine his heart sunk when he saw that my license was far from the renewal date ("ano yan, 2005?". "di po, 2006 pa yan mag-e-expire") and it dawned on him that he had nothing to pin on me. I did say I'm a well-behaved motorist, and that I would never cross an intersection if the light was red. Man, that felt good.

Anyway. So I met up with my mom and older sister and we caught Sandata's last song and took a few pics before they left. Next up was Kastigo, who did a good number of songs. I'm not saying they're a good band just because my sister plays with them, but because I honestly think they have a lot of great material. They sounded great, and as tight as other professional acts out there. The band did their own stuff, and they were heavily applauded. They finished their set with a cover of Tropical Depression's "Kapayapaan" and their own song "Divide", which they dedicated to the victims of the recent lanslide that hit Leyte.

The third act was UrbanDub. Oh boy, they sound like they do on CD. They did about six to eight songs including "Soul searching", "Alert the Armory", "No ordinary love" (my personal favorite), "First of summer", "Gone", "Sailing", and "Come", "A new tattoo". As I've said before, my opinion on a band greatly depends on how they sound when playing live. The vocals, guitars, drums, and bass came together oh so greatly. Awesome set is all I can say really.

I didn't wait up for MYMP because it was getting late and I was already hungry. The bands headed off to one of the vacant classrooms (well all of them were empty since it was a Sunday night) to get some grub. I met up with my sis and the rest of the band to grab a quick bite before I headed home. I was sorely tempted to ask for an autograph from the members of UrbandDub (I think they were in the next room, but their guitarist and drummer passed by in our room to get some food) but decided not to, lest I come off as a drooling fanboy.

All in all it was a good show, and a nice trip down memory lane. It felt nice and weird at the same time to have come back to my school after all this time. I ran into a couple of my teachers at the entrance of the gym because they helping out at the event, and one other at the classroom where we ate afterwards. I had a brief conversation with one of them...they didn't fail to note that I didn't look as "healthy" back in high school. Har har har :)

These are the pics I have so far. The batteries died on me so I didn't take a lot, but there's a lot more to come after my older sister emails me the rest of the ones she took with her own camera: 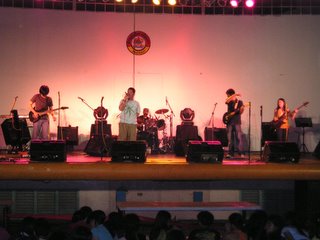 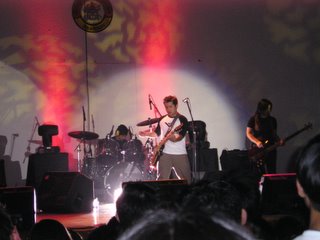