Just a condensed collection of observations accumulated in the 3.5 months we've been here:

Paulette, our Canadian friend and classmate from the kominkan (local community center where free language classes are held etc.), says that other foreigners living here have grown jaded and angry over the years. She says it's mainly because people here lack a sense of humor, but I beg to differ. She's been a kindergarten teacher here for 14 years now, so I guess she knows what she's talking about, yet not everyone here acts the same. Any country has different kinds of people, so there's really no difference where you are. Some of the people I work with are friendly and accomodating while others are sarcastic and downright condescending. The drivers especially like to joke around and laugh the loudest so I can't say that they don't have a sense of humor. It's just the cultural difference that gets in the way of seeing them for who they really are.

Speaking of the drivers I work with, they're the ones who use Hiroshima ben (the local dialect here) the most. There are many times that the Nihongo I took up during and after college goes out the window as soon as they start speaking. That's partially why Lyn and I started taking free language classes at the kominkan like I mentioned earlier. It gets frustrating sometimes when I can't express the more complex thoughts and emotions I want to convey, but it'll get better the longer I stay I suppose. In the past couple of months we've been corrected by our team leader Yamasaki san on how to properly use the language. For instance, a bunch of us saw some oddly brown colored drops of liquid on the floor as we were clocking out for the day. As a joke, I told Koyanagi san that it was "kuso", the word for "shit". She laughed at me the way an adult would at a child that unknowlingly uttered an expletive, and not fully aware of its context or usage. My unwittingly misplaced attempt at humor quickly reached Yamasaki san, who half-scolded me. "Kouhi dake" (it's only coffee), he said in a partially amused/shocked tone. This was followed by laughter from Iwano san, the senta chou (center chief) who found the whole thing funny being that I was a gaijin who didn't yet realize that the word was rude. There was another time when Yamasaki san advised us to refer to a woman as jyosei rather than onna (which literally means "female"), which Lyn and I thought was acceptable. You could say onna no hito (female person), but plain onna won't do. Strangely enough, using the term otoko (male, without the hito suffix) is perfectly fine. 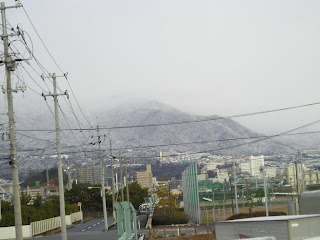 snow-capped mountains outside our window

Back home, the weather only ranges from typhoon cold to suffocating heat coupled with insane humidity. Obviously, it's quite new for me to deal with living through four different seasons in a year. We arrived here during aki (autumn), so there were many times when we biked outside without having to put on a jacket. Since it started snowing last December 31st however, three layers of clothing plus a jacket and your choice of headwear is a prequisite when going out. So far, it only snowed for a few days last month (and hasn't since) but recently the average temperature at night is a few degrees shy of zero, if not below. We're still waiting for the peak of winter, which is February when it gets the coldest. Snow is pretty to look at when indoors, but it quickly loses its charm when the reality of having to deal with it sinks in.

Just for kicks, I've decided to put up some pics of the stuff I've eaten thoughout the duration of our stay here: 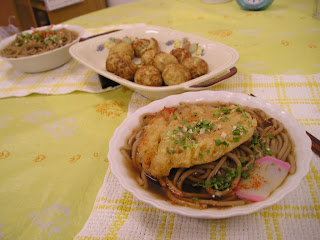 Soba served with tako (octopus) balls. The tako balls are mainly a wheat-like substance with a chunk of octopus in the center. The noodles all came in a ready-to-eat bundle (got it on sale for about 120 JPY/45 PHP for two packs) which includes the pink kamaboko (fishcake) and the actual soup itself. 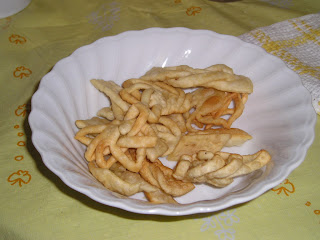 Fried cookies made from wheat sprinkled with sugar. Our Chinese co-workers who live right next to our room cooked this for us. A tasty snack I sneak into work in a little ziploc bag when I get the munchies. 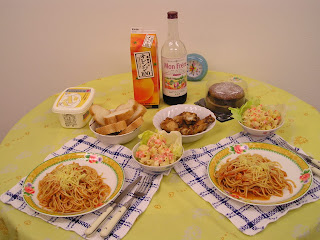 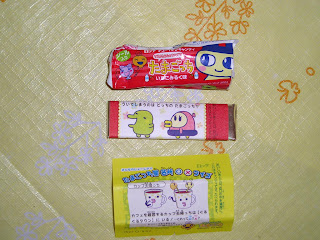 Tamagocchi-themed fruit chews (which look like gum) that my co-workers gave me. 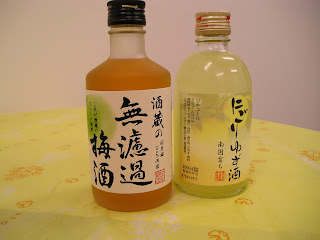 Mori san gave this to us a couple of days after we got into a conversation about drinking. It's shochu, a popular alcoholic drink here. I haven't had any yet, but Mori said to drink it slowly and alternately with water because it's stronger than sake. I haven't figured out the difference of the two bottles seen here, but I'll ask him at work this Monday.
Posted by marko at Sunday, January 06, 2008

yo marko. shochu is made from either sweet potato or some other plant. sake is rice wine, at least that's what my mom's japanese friend tells me.

how has japan been? it seems like you guys are adjusting pretty well there.

hey there :D we're going home by September, and it's kinda tough right now since we're bracing for the peak of winter which is this February. Thanks for dropping by :D